“The road to enlightenment is long and difficult, and you should try not to forget snacks and magazines.”  -Anne Lamott.

By the time any of us reaches the ripe old age of 78, as I have, we have been treading that road to enlightenment long enough that we’ve had to replenish those snacks and magazines dozens of times over the years. Of course, it’s been best if we’ve worked in some variety as well. The road has also been home to the Inner Critic who would like nothing better than to keep us unenlightened for as long as possible.

In elderhood, we’re running lower on time; we’re maybe living with at least a bit less energy (most of us, anyway); we’ve tried new things again and again with mixed results; and we have learned to recognize the voice of the Inner Critic that psychologists discovered and named for those of us who live with it – which means everybody.

For us elders, the Inner Critic is an Old, Old Companion on the road. From childhood at least. Its messages are reliably negative; its power ebbs and flows; and it convinces us to lay down the snacks and magazines over and over so that it can remind us that we are…pitiful creatures; sad examples of the human race; impossibly flawed; and should just go sit in the corner and think about how ashamed we should be for thinking we could be better than we are.

The Inner Critic is relentless and it is tireless. It will attack at any time and any place. And besides, it’s sneaky.

Oh. Wow. That’s depressing. Shouldn’t I have outgrown that kind of garbage by now? (Oops…IC stuff??!) Yes, yes, maybe so. But I haven’t.

I have become a bit more selective. I’m more likely to get clobbered now when I’m being creative. I’m a writer. So I keep putting myself out there and giving it life. As in…every time I begin my first draft. And my first edit, and second and third. Every time I hit that “Publish” button. Of course, the IC thrives on creativity. So that is where most skirmishes appear now.

The Good News: We are hearing that being creative in our elderhood can have all kinds of miraculous benefits: happiness, clearer brains, more complex thinking and problem solving, the joy of community, better overall health, a more productive life. What’s not to love about that?! (Spoiler alert: Reminder: the IC thrives on creativity.) The news is good enough for many of us to keep on living our creativity in spite of the wiles of that intrepid critic.

It’s a matter of finding out what avenue our creativity wants to follow. And then getting started. We discover that with practice and discipline and determination and courage and vulnerability and persistence and patience and love for our craft, enlightenment arrives in spite of the voice that tries to tell us it’s all in vain.

My chosen avenue has been writing, which went to a new level when I connected with my mentor, Bill Apablasa, of Oxygen Buzz, who never fails to cheer me on. Who helped me get this blog started in the first place. Who won’t let me put down the snacks and magazines and give in to the inevitable and unrepentant voice of the Inner Critic. Friends and colleagues and mentors are invaluable in the battle against the IC. They keep its voice in check, its lies exposed. Bill’s especially good at that.

These days, I’d been thinking I should just be satisfied with growing my writing and let it go at that. I’d been learning to outwit the IC and to forge ahead in spite of its persistent naggings.

You know what they sound like, right? Whatever the IC is attacking, it is clever and its mockery tries to wear us down.

“You can’t really think your writing is worth putting out in public. You’re mediocre at best; pitiful and shallow at the worst. Go watch some Netflix and give the world a break.”

“Ha! Lookit…a handful of people who even care that it’s out there. You’re a waste of time and energy.”

“What makes you think you have anything of real importance to put out there?”

“You’re almost out of ideas, my dear. Good luck with that.”

“You liked that sentence? Are you kidding me? That paragraph is a joke!”

“You’re never going to have it ready in time. Why not just give it up?!”

“He/she (beloved writers) is just the best! Write like him/her! (Ha! You Can’t!)

I could think myself a fool if I didn’t love it so much.

Maybe I am a fool, but I love it so much.

As if this weren’t enough wrangling with that weary IC, however, I have taken on a new creative endeavor: watercolor painting! And look who followed me into it…my IC! The very same one who knows me intimately and who loves to keep me  off balance whenever possible.

The opening picture, above, is mine. This one below is what “inspired” it. No comparison! I should forget it. 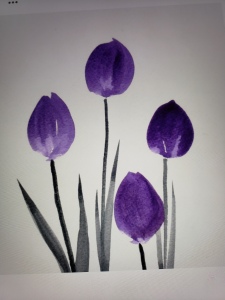 Take all of the wicked IC words about writing, above, and insert artsy critique.

Okay, I’m not a born artist. I’ve done Norwegian rosemaling, though, which is much more challenging than this, and I’ve created really beautiful things which I love immensely.

But it took some years of practice and experimentation and tutoring to achieve the level where I could sigh with satisfaction and thumb my nose at the IC and say, “Well done, Martha!”

So now I watch tutorials on YouTube and Pinterest. I bought some watercolor brush pens which are going to be a challenge of their own, it turns out. I save pictures that I think I can achieve more easily.

And always, always – remembering to laugh at the Unrepentant Inner Critic, because every step forward is a step away from her.

She doesn’t give up and neither do I.

Call me a fool, but I love it.

Every little battle becomes the next enlightenment.