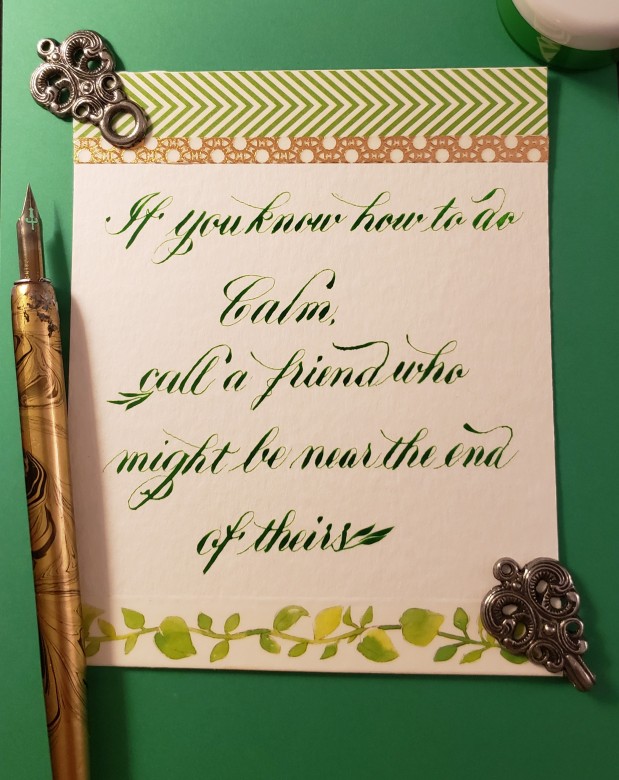 When my first blog was published on September 13, 2018, I vaunted the amazing sense of calm that I had found in my elder years. It had just appeared, it seemed. Without my even asking for it. How lucky was that?

I was home free!

Of course, I actually had asked for it. Calm had arrived, but only after I had done decades of work, gone through changes that were sometimes excruciating, sometimes gloriously joyous. Oh, I had asked for calm. But in the end, it had snuck in on quiet little feet without my really noticing its arrival, until one day, I did.

Calm was my constant companion in my 70’s and I never got tired of giving thanks for it. I assumed its permanence without giving it a second thought.

On May 17th, I will become 79. Almost out of my 70’s. And calm, it turns out, was not permanent. It only took a microscopic virus with an odd little name for a mighty foe: COVID-19, to remind me that life is change, and some changes are more easily negotiated than others.

Calm is at a premium in these days around here. I often have to fight for it (oddly enough). Pay attention to its absence. Try the tried and true remedies when it goes on vacation. Some work; some don’t.

So I depend on my calmer friends, those who are personal, and those to whom I listen as I sit before my iPad screen.

Calm becomes an even more precious commodity in these days because I’ve had to work for it every day. It can take an energy that isn’t always right close by. Some days, it arrives earlier than others.

But it is there, I know. I’m developing patience as I make my way through strange places in my spirit. Calm is still within reach, and it even arrives by new messengers these days.

I am reminded that every change, every discontent, every crisis, every worry has always been the doorway that leads us to the next room that we are to inhabit.

The secret is to remain curious in the midst of it all. To watch – and wait – knowing that we will be different somehow when all of this strange new crisis of a life is finished. To know that in the end, all of the changes have been grace that arrived at its appointed time.