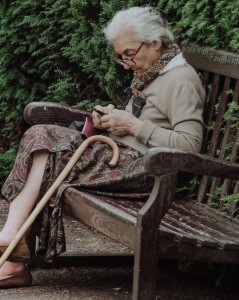 “From the National Weather Service…FLASH FLOOD WATCH REMAINS IN EFFECT FROM 7 AM CDT THIS MORNING THROUGH WEDNESDAY MORNING…1 to 3 inches of rain with locally higher amounts possible…With already saturated soils, this heavy rain may cause flash flooding. Mud and rock slides will also be possible in the bluff areas.”  -October 1, 2019

(Old woman, out for a walk, pauses to rest and catch up on social media and messages)

It’s raining. Again. It’s 5:30 a.m. I have been lying in bed thinking of Arlen and Jim and their families. Regular folks whose lives are seriously interrupted by yet more rain. There has been too much of it all summer. Farmers are hurting.

The bean harvest had finally been under way for just a few days in these parts. It was a relief that the soybeans were finally dried out enough to begin harvesting them this past week. The hum of combines appeared in the countryside as Midwest farmers spent long hours bringing in their crop. The corn harvest is down the road a bit yet, but the rain is a problem for drying corn as well. And now the beans must wait again. They must dry out again before the harvest an be finished.

Arlen’s son and Jim are in their late-50’s/early 60’s – “old” by cultural standards. Yet they continue their lifelong work of planting and harvesting and hoping that nature will be kind to them this season. And when it is unkind, they wait – until the very moment that they can climb back up into the cab of that giant hulk of a machine, turn the key to begin again, and follow the neatly planted rows to bring in the harvest for yet another year.

No sophisticated national magazine will feature them as the icons of a “successful old age.” They will not be notably praised for rising above the limits of their age, and they will not be considered remarkable examples of the physical sturdiness or the indomitable drive of our culture’s elder heroes.

They’re just regular folks. Doing what needs to be done. It may be harder to get going in the morning when their joints are stiff from a few hours in bed. An extra long day may be more tiring now, but farming is a calling first, and the hard work is a labor of love as much as it is a job to get done. Stiff joints and maybe a bit less stamina don’t stand in the way. The work must be done.

So here’s to the farmers who forge ahead without fame.

Here’s to the grandparents who are raising or helping to raise their grandchildren. It can be exhausting work, but they wouldn’t think of not doing it. They are remarkable, but never famous. So, too, the grown elders taking care of their even older parents.

I have a good friend in his 70’s who has developed a bad shoulder. He was the point guy with the nail gun when a group was putting siding on a Habitat for Humanity house a few weeks ago. So he visits his chiropractor and hopes for the best. Here’s to the elders whose bodies may not be as strong, but who go out and use them anyway so someone else can have a better life.

Here’s to the elder runner whose goal is not to win a 5K, but to finish the race. Of course, the one who wins gets a front page picture somewhere. But the picture is not the goal. The challenge is. And also, kudos to every elder who finds a way to exercise their aging body most days. Not so that they can be “young,” but so that they can be the best “old” that they can muster.

Here’s to the bloggers who may never write The Great American Novel, but who reach out with hope to reassure present and future elders that this time of life can be the best of times. Judith Guest bemoaned in her “How Did I Get to Be 40 and Other Atrocities,” that even if we did manage that novel, we wouldn’t be able to hear, “And she did it so young!” Still, they write.

Here’s to the retired who mentor younger workers and students. Who bring the perspective of experience to the table and yearn to pass it on. My father did just that in a Minneapolis school when he was in his mid-80’s, and he was adored.

The Methodist Church to which I belong has served a hot meal and friendship every Saturday noon for more than 25 years to anyone in the community who needs food and dignity. It is run by and mainly staffed by “elders.” So here’s to the elders who overcome stiff hands and knees so that they can bring nutrition and companionship to those who are otherwise largely ignored.

Here’s to those who take their civic duty seriously and vote. Who care enough about the future to march for what they believe in. Who drive elders to medical appointments or grocery shopping.

I could go on, of course. I get weary of the push against ageism that promotes a narrow vision of what a “good” old age looks like. I seem to see more images that suggest that being somehow “younger” is the aim of successful aging. I have DVD’s for seniors that are named, “Growing Young.” The exercises are wonderful, but growing young is not my goal. Staying as strong and limber as possible in my older years is the goal.

So here’s to all of us who are doing our best, most of us humbly and without fanfare. Each of us as one of millions over age 50. Finding our best years as best we can.

Here’s to the future – and all those who will follow in our footsteps as best they can, too. Just regular folks.

And I’m very okay with that. But enough of me.

Who are the elders – the regular folks who you know – who are living the best they can and doing it without fanfare or special  recognition? Let me know in the comments. We all need to know about them.