Just when I get to thinking that I have myself pretty well figured out – well you would think so at 78 – life comes along and surprises me with another way of explaining some more of who I really am. And sometimes that’s an eye-opener that makes me smile. And gives me hope. And a wry chuckle.

You don’t have to be a Christian to recognize poetic prose when you see it. This beginning to the Gospel of John is one of my favorites, not only for what it proclaims, but also for the beauty with which it speaks of this new thing that happened in the world. That a long-awaited Savior was born. In churches everywhere we remember what the world was like before Bethlehem during the season of Advent.

In the Christian world, the season of Advent began on December 1st this year, and it will end December 25th. I had watched a video by a favorite artist a short time before that and decided to take her up on her suggestion. She had made a little Advent pocket book using watercolor and creating abstract designs for each of the 25 days. She invited us to do our own version.  I liked the idea. I was intrigued.

But could I take on something this big? Big for me, anyway. The beginner. The non-artist. The chicken at heart. 25 pages to try to think of something creative for each one? Very. Tall. Order. #Ceeceeadvent had given me the artsy basics. I thought that maybe I could add Advent scriptures to each one. Nothing like making a terrifying idea even more complicated! But Isaiah, I knew. Painting, not so much.

So what the heck would the backgrounds look like? That was the sticking point. Doubt set in and quickly made its home. I began to look away.

I do not have one single artistic gene in my whole darned body! So this would be an exercise in futililty, right? But here was the rub: I was already caught by it.

The idea caught on in part because it would use both of my two new loves: watercolor painting and calligraphy. Ta da! All this money and time and practice and frustration and hope and minute signs of progress could pay off in this project! But – was I biting off more than I could chew? I hesitated for days. (I have SUCH a gift for avoidance!)

Then came a seemingly random day –

I was just loosely practicing, making long lines, curved ones which are difficult, just randomly picking colors and shapes. Ach, what a mess! I almost tossed it, discouraged by my lack of imagination and graphic creativity. (See? I told you. You can’t do it!) Then those verses from John showed up! I looked at the spaces between the curves and realized there might be room for that favorite Advent Scripture. What??? There was! And right down the middle, there was even just enough space to write the last line:  …”and the darkness could not overcome it.”

That word of hope whenever the world seems hopelessly dark.

That funny, weird little design set my direction, and I kept taking chance after chance – trying this and trying that, page by page. Color, shape; aha, let’s try a little gold leaf…just a couple of small spots…what color gel pen shall I use over these colors…It became a game. A little game of risk, of possibility. 25 pages in all for the 25 days in Advent. Would I last? Why, yes, yes, I would.

Some were better than others, but I love every one, because each one taught me that I could just throw caution to the winds and let what comes, come. They taught me that often, creativity just waits for us to let go.

In those 25 hard-won pages, I found a part of Martha that was just waiting to be found.

I found that I am braver than I think I am. That I am stronger than I realize. And ta-da! That I am even a little more creative than I give myself credit for. 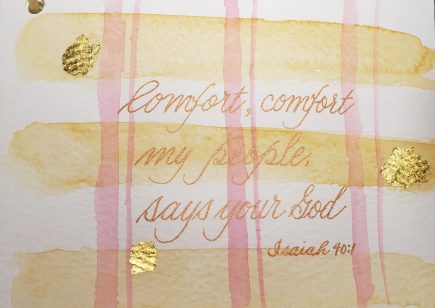 I found a confidence that I’ve been lacking. I found hope and a surprise creativity just when I had been thinking that watercolor painting was just going to be a step too far.

And I learned that perseverance is my gift at the most unexpected times.

We all have them. Gifts that we haven’t unwrapped yet.

Gifts that show us more of how remarkable we really are.

Am I going to start posting on Facebook or Instagram? Not likely!! But I have found a part of me that can find the amazing grace of joy in just taking a creative chance. In beginning. In discovery. And doing it just for the unexpected delight that just might show up this time. Finding me again – in a new way.

I'm Martha Hendricks, a once-reluctant elder who has made peace with my old age. I've been a professional singer, pastor, writer, decorative painter, introspective elder who still finds life fascinating. I chose "elder" because of its historical links to wisdom and experience. Time will tell if I have the former. I certainly have lots of the latter. View all posts by whitehairgrace

10 thoughts on “Creativity and Finding Ourselves”

This site uses Akismet to reduce spam. Learn how your comment data is processed.

Hi, I'm Martha Hendricks. Welcome to the world of elderhood. My hair is white with age now. My heart is full of gratitude, and I still find that grace always shows up eventually. So we tell the stories.